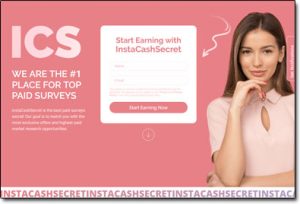 InstaCashSecret is a newly launched website that calls itself the “‘#1 place for top paid surveys” and it claims that it can give you access to exclusive offers & high-paid market research opportunities that can allegedly see you earning as much as $100+ per survey.

But is it really legit? Because paid surveys are renowned for being extremely low paying & not very rewarding.

Or is InstaCashSecret a scam that’ll somehow just end up conning you instead?

It pays to do you due diligence when it comes to these types of sites because I have indeed seen several paid survey scams & you’ll be glad you can here to my InstaCashSecret review before joining because I can tell you that InstaCashSecret is NOT what it seems.

As I briefly mentioned above, InstaCashSecret is a relatively new website that has just launched & it has launched with the incredibly bold claim of calling it the “#1 place for top paid surveys”, which has made me a little bit suspicious about it… 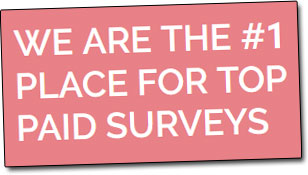 I’m certainly doubtful – but given that most legitimate paid survey sites only pay out on average less than $1 per survey while InstaCashSecret claims to pay out a whopping $100 per survey, maybe it could…

Well, the truth is that as you’ve probably already suspected InstaCashSecret is NOT what it seems – in fact, it’s not even a paid survey website… The whole thing is just a trick designed to make its creator wealthy at your expense.

But how does it do that I hear you ask? Well, keep on reading as that’s exactly what I’m going to explain below…

So InstaCashSecret leads you towards believing that it’s a high-paying paid surveys website, but it’s not – it’s actually just what’s known as a “paid surveys aggregator” which means they just recommend other paid survey companies to you.

Firstly there’s absolutely no reason you should need to sign up to a website like InstaCashSecret to get access to paid survey companies because you can easily find a whole load of them online without signing up… I myself have even put together a list of paid survey sites here.

The reason InstaCashSecret want you to sign up though is because they want to bombard you with spam emails – so if you sign up to their website you should expect emails from them pitching other make-money related stuff.

And the reason they’re bombarding you with this stuff (including the paid surveys) is because they’re affiliated with all of the companies that they’re recommending which means they’re getting paid commissions for getting you to sign up.

Again there’s nothing wrong with that – I myself do it – but the problem is that InstaCashSecret are doing it dishonestly. They’re claiming that you’ll get $100 for completing your first paid survey and it’s just not true.

They’re basically telling you lies to trick you into signing up… And that’s the biggest problem.

As I mentioned towards the start of this review paid surveys typically pay very little. It’s very hard to find high-paying paid surveys and even the high-paying ones likely won’t see you earning much more than $30 per at most…

They don’t typically reward you very well for your time whatsoever and that’s why I always recommend these alternatives instead.

It’s also worth pointing out here that there are few other paid survey scams that claim to provide you with access to high-paying surveys but require you to pay some money upfront. InstaCashSecret doesn’t do that, but you should be aware of sites that do – such as Take Surveys For Cash &  Paid Surveys At Home.

Never pay anything upfront to get access to paid surveys… If a site is asking for money it is likely trying to con you because like I said paid survey sites are very easy to find, and you can check out my own list of them right here.

Well, I guess from a technical standpoint it’s not really a scam as such however what I will say is that in my opinion, it is misleading & as far as I am concerned it is simply unnecessary because you can quite easily access paid surveys without signing up to InstaCashSecret.

It’s quite clear to me that in reality the InstaCashSecret website has just been set up so that the people behind it can earn by referring you to paid survey companies & then by following up with emails to promote even more offers to you.

Everything they recommend to you they’re affiliated with which means if you sign up, they earn a commission… And like I mentioned previously in this review that alone isn’t a bad thing but it’s the way they go about it that I don’t like. They’ve involved trickery rather than just being upfront.

So for that reason, I am not going to be recommending InstaCashSecret to you. Instead, I would recommend you either check out my list of paid survey sites here or choose one of the alternative ways to make money instead.

Like I said earlier paid surveys don’t really reward you too well in return for your time so I would advise that you pick another method like affiliate marketing instead which can prove to be much more lucrative & reward you much better for your time.

In fact, the earning potential with affiliate marketing is completely uncapped & I myself earn a full-time income with it. The best part is that now there are programs like Commission Academy which will show you exactly how you can get started.

Whatever you decide to do though I just hope that my review of InstaCashSecret here has given you a good insight into how it really works & hopefully you can now see the bit of trickery involved. If you still happen to have any further questions or comments about it though then, of course, don’t hesitate to leave them below. 🙂