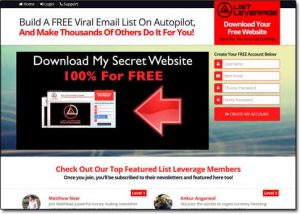 The system’s also supposedly been designed with newbies in mind, so basically anybody is supposed to be able to sign up & profit from it… But is it actually legit or will List Leverage scam you instead? That’s a question a lot of people have been asking.

Thankfully though if you have also been wondering the same thing then you can rest assured that you’ve landed in the right place to find out as I’ve taken a closer look into it all & in this review I’ll be uncovering the truth about how it all works & whether or not you can really make any money with it.

As I briefly touched on above List Leverage is one of the latest creations from a guy named Matthew Neer, and I’ve actually reviewed quite a few of Matthew’s previous products right here on this blog.

The majority of his products, such as the Viral Cash App, the Speed Wealth system & the Viral Money Method all promise similar things. They all promise that they can help people lot’s of money online really quickly…

Sadly though I’ve yet to come across one that actually works as promised.

So will List Leverage be any different? A lot of the top internet marketers seem to be associated with it so I’m kinda hoping that there might actually be some substance to this one but there’s only one way to find out…

Let’s take a look at how it all works & see for ourselves. 🙂

Okay so as the name suggests the List Leverage system is based around email marketing & building an email list. This is something that a lot of people are interested because they here time & time again that “the money is in the list“.

Most online marketers will tell you that they make most of their money from their email list & that it’s vital for online success… Which is kinda true.

I mean don’t get me wrong you don’t need an email list to find success online, but having one really can take your income to the next level. However it’s not just as simple as “build a list and generate riches”.

Successfully building & profiting from an email list is actually quite a fine art.

But that’s where the List Leverage system comes in, because Matthew Neer who’s behind it claims that he’s pretty much done everything for you, and he claims that he’s come up with an innovative method which can enable you to turn 1 subscriber into thousands.

So I know what you’re wondering… What’s his innovative method?

And whenever I see a structure like that I always get a little bit worried as it obviously quite closely resembles a pyramid scheme. I’m not saying that his program is a pyramid scheme – I’d class it as more of a multi-level-marketing scheme, but still there’s only a very fine line between the two.

Not so long ago a big company named MOBE which operated a similar structure was recently shut down by the FTC.

It’s therefore safe to say you have to tread carefully with these sorts of things.

But now I know your next question… How does this structure help you build an email list any faster?

When you initially sign up to the List Leverage platform you’re asked to enter your email address, and when you do you’ll “secretly” be added to 6 random email lists from other members of the List Leverage system.

This basically means that they can bombard you with whatever they want – and whilst you can unsubscribe from each, I personally feel that it’s a big “naughty” for you to get added to all these email lists without really knowing about it.

Anyway if you do actually go all the way through with the registration you’ll find out that basically you just have to promote the List Leverage system to others, but via the link you get to promote your email list will be included in those 6 slots.

So if you refer somebody to the List Leverage system via your affiliate link the person you refer will get added to your email list and 5 other random ones.

Then the idea is that you get the person you referred to go on to promote the List Leverage system too. If they do, then through the link they promote their email list will be included in the 6 slots (at position 6) and so will yours (at position 5).

So essentially now whenever this person brings in a new subscriber they are going to go onto their email list, but they’re also going to get added to yours too – and that’s how you’ll supposedly turn 1 subscriber into thousands.

Unfortunately, It Won’t Work As Promised

And there are a couple of reasons for that.

For a start if you really want to build your email list using the “innovative method” this system provides then you’re going to have to promote the List Leverage system onto other people & that means two things… If you’re no good at generating traffic then you’re still going to struggle with building an email list… And the email list you do build will have to be within the MMO niche.

What’s bad about that? Well they’re either just immediately gonna unsubscribe as soon as they see random emails coming through OR they’re going to do the even worse thing & hit the spam report button. A few of them do that & boom your email list is dead in the water.

So like I say it’s good in theory, not so good in practice.

You get to find out that it’s not free at all! 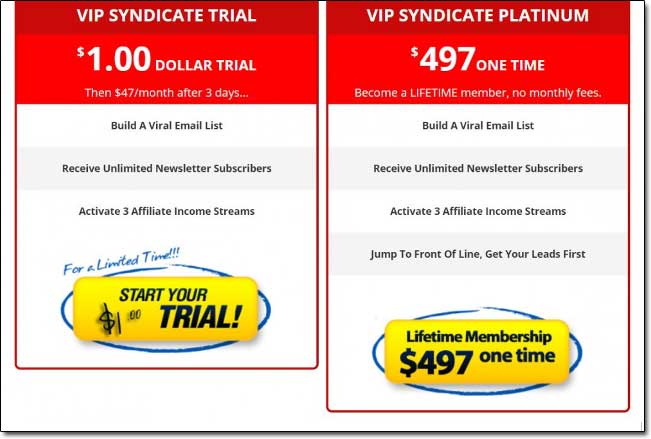 Instead you’re presented with two options – you can either sign up for a recurring fee of $47 per month or you can hand over $497 and become a member for life (with the latter option being pushed).

So based on what I’ve said above is it really worth the cost? In my opinion no, it isn’t. You’d be much better off just starting a blog & building an email list the proper way, you’ll find more success like that.

Well no, it’s not a scam – not at all… That would be a pretty harsh verdict to come to. I appreciate that Matthew Neer has built something fairly unique, and after handing over your cash you do indeed get access to a “list building system” like you were promised… It’s just that in reality it’s not quite as great as it seems.

Oh, and also as I just mentioned above it’s not free either… So in my opinion whilst it’s not a scam (at all), it’s just not worth the money because as far as I’m concerned it won’t really help you out.

I mean if you’re in the MMO niche then maybe it could work out for you & help you get a few extra subscribers but you will still be faced with the problem that they won’t know who you are & that they will be added to 5 other email lists at the same time too… This means they won’t be very good subscribers at all.

So overall I am not going to be recommending the List Leverage system & hopefully after reading this review you can see why I’ve come to that conclusion. But if you are still interested in making money & you want legitimate training on how to do it the proper way then I suggest you check out Commission Academy instead.

It’s at Commission Academy that you’ll learn the proper methods for marketing online & building an email list the right way, and at least you know by joining there you are joining a program that’s proven to work.

But anyway if you still happen to have any question about the List Leverage system or if you have any comments you’d like to add to my review then don’t hesitate to leave them below & I’ll respond back as quickly as I can.