Earlier today, I happened to land on a website named Multiple Income Funnel & as the promotional video started playing I immediately recognized the voice of Mack Mills, a well-known internet marketer. 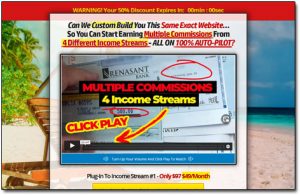 The system stated that I could allegedly sign up & begin generating commissions from 4 different income streams all on 100% auto-pilot, even if I was completely new to making money online.

But is it actually legit?

Or is Multiple Income Funnel a scam?

Well, after taking a closer look into it I can tell you that it’s not exactly a “scam” as such, but in this Multiple Income Funnel review, I’ll be uncovering why I don’t recommend you join.

Plus, I’ll also be sharing information on what you can do instead.

What Is Multiple Income Funnel?

Multiple Income Funnel is a brand new “online business opportunity” that’s been put together by an online marketer named Mack Mills & it promises to provide you with a way to begin generating commissions, all on 100% auto-pilot.

Essentially, the Multiple Income Funnel website leads you to believe that you will be able to simply sign up & begin making money, and it even suggests that you can make $1,000’s per day…

Without doing at work at all.

But I think you’ll agree, that’s a pretty bold claim.

You see, there are many legitimate ways that you can earn money online – but in over 8+ years of working full-time online, I have never seen a method that worked 100% on auto-pilot.

If there was such a thing, I would be using it myself.

But regardless, Mack (the creator of Multiple Income Funnel) claims that if you pay him $49/mo, he will custom build you the exact same website that he uses to generate an auto-pilot income.

Pretty generous of him, right?

In return for $49/mo, he is going to custom build you a website that generates $1,000’s all on complete auto-pilot.

As you can imagine, there is a catch & I will explain exactly what that is in a moment, but first let’s take a closer look at who Mack Mills actually is so that you can get a better idea of what’s going on here.

Who Is Mack Mills?

Mack Mills is an online marketer that typically promotes things in the “online business opportunity” space & he’s certainly made a lot of money throughout his career. 8-figures, as per his own claims.

However, a quick Google search of his name reveals that he has also built up a pretty negative reputation.

The reason for that is because Mack Mills is behind several “make money” systems, such as:

And they all make over-hyped, unrealistic claims – meaning that people join his systems expecting to be able to make lots of money really easily, but then later find out the opportunity doesn’t materialize.

Instead, they just lose their money & Mack gets richer at their expense.

So, as a result, it’s probably easy to see why Mack has gained a pretty negative reputation.

But in the same breath, I’ll admit that Mack is quite clearly a guy that does know a thing or two about how to market things & how to build systems that do actually convert into sales.

And that’s essentially what the Multiple Income Funnel is designed to do.

You’ll see what I mean as I explain in finer detail exactly how it all works below.

How Does Multiple Income Funnel Work?

And then finally, promoting Multiple Income Funnel to others & getting them to do the same.

So, yes – you guessed it… It’s a Ponzi scheme. There is no real product here.

Mack, of course, would argue that it’s a “marketing funnel” but it’s quite easy to see that it is simply about investing money & then recruiting others to invest below you, exactly like you did.

By the FTC’s definition, that’s a scam.

So the gurus that are promoting these things will be earning lots of money, for sure, but they’ll just be earning their cash at the expense of those that they manage to trick into joining.

And sadly those “newbies” that join will just find themselves spending more than they ever earn.

Oh, and I nearly forgot to mention that the true cost of the program is over $10,000.

And if you don’t invest that full amount of cash, you won’t be able to earn the larger commissions… This means that it’ll be EVEN more difficult for you to manage to turn a profit.

For gurus with broken moral compasses that are simply looking to sucker newcomers in & earn cash at their expense, Multiple Income Funnel could be seen as a pretty nice program.

For everybody else, the program comes with a lot of problems.

The first problem is the obvious one, the fact that it’s a Ponzi scheme. There is no real product & instead, members are simply investing money & then recruiting other members to do the same.

The second problem is that the true cost exceeds $10,000 & unless you invest the full amount, you will not be able to earn the larger commissions.

The third problem is the fact that the average person who joins will NOT see success. This means that either YOU will not see success, or you’ll be suckering other people in knowing that they ain’t really gonna make money.

And the fourth problem is that it is absolutely not 100% done-for-you. Sure, the sales page is done-for-you but you still need to generate the traffic & that’s literally the most difficult part.

Is Multiple Income Funnel a Scam?

By the FTC’s definition, yes – Multiple Income Funnel is a scam.

The reality is that it is technically possible to earn money with Multiple Income Funnel, but that money is made by investing & then recruiting others to invest exactly as you did.

There is no product, and there is certainly no focus on a product.

As I mentioned further up in this review, the Multiple Income Funnel system has just been set up to enable expert internet marketers to take advantage of newcomers & earn money at their expense.

The average person that joins Multiple Income Funnel will NOT make any money. They will simply find themselves spending money & making those that recruited them richer at their expense.

For that reason, I recommend that you avoid Multiple Income Funnel (and any other programs that make similar hyped-up promises).

The reality is that it is possible to make money online, but not without work. There isn’t (and never will be) a system that will generate you an income entirely on auto-pilot without any work whatsoever.

I mean sure, with methods like affiliate marketing you can certainly work towards a passive income, but it will not happen right from the off. You will need to put in work at the beginning.

The good news is that if you are still looking to earn money online, there are other legitimate alternatives you can pursue and I’ve put together a list of the best ones on my top picks page right here.

But whatever you decide to do, I just hope that my review of Multiple Income Funnel here has given you a good insight into how it really works & I hope that it has helped you to save some money.

If you happen to have any further questions or comments don’t hesitate to leave them below.