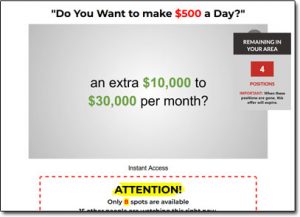 The creator claims that it’s different to anything else & that only a few people will be allowed access due to so-called “time limitations”, but in order to actually get access you have to hand over some of your own cash first which has probably made you suspicious.

So what’s the truth about it? Is My Home Cash Club legit & does it really work as promised? Or is it just a scam that’ll result in you losing money rather than actually making it?

Well it’s a good job you decided to do your due diligence before signing up to it because I can tell you straight away that the My Home Cash Club system is NOT what it seems & as you’ll soon see in this honest review there’s a very slim chance of you making any money with it.

What Is My Home Cash Club?

The newly launched My Home Cash Club system promises to give you access to a “shocking & extremely lucrative” method for making money online that has allegedly never been seen before.

You’re led to believe by the system’s creator (who remains anonymous) that using the method you’ll be able to generate a guaranteed income of $10,000 to $30,000 per month right from the comfort of your own home…

And if that doesn’t already sound good enough, the creator even claims that you can earn all of that money by putting in just a mere 30 minutes of work per day.

But there’s something fishy about it…

And I can tell you right from the off here that the My Home Cash Club system is indeed too good to be true, and I can say that with 100% confidence because I’ve seen this exact same system several times before.

The whole thing doesn’t work as promised (as you’ll soon see in this review) and the creator just keeps changing the name of it in an effort to escape the negative reviews so that he can continue tricking people into paying money to join.

But as I say, despite the names & websites appearing to be different, the con behind it remains exactly the same as you’ll soon see for yourself below when I explain in greater detail exactly how it all works…

How Does My Home Cash Club Work?

The truth is that despite its bold & seemingly attractive claims, the My Home Cash Club program in reality is all just a ploy to get you hand over some of your own hard earned cash so that the creator can earn at your expense.

There isn’t really any “secret” or “never seen before” strategy inside of the program, and there’s frankly no way that you’ll find yourself making anywhere near $10,000 per month with it by just putting in 30 minutes of work per day.

Then when you do sign you up you’ll be left to discover that all you’re provided with is some extremely basic training on something called affiliate marketing, which in itself is a legitimate way to make money.

Affiliate marketing is actually the same way I make most of my own money online.

The problem doesn’t lie with affiliate marketing itself, it lies with the way that My Home Cash Club sells it to you, and it lies with the extremely poor quality training they provide you with in return for your money.

You see affiliate marketing basically involves you connecting people with products/services online & getting paid commissions in return – and there are legitimate places you can get started with it such as Wealthy Affiliate.

However what you must be aware of is that affiliate marketing takes work & time. You cannot just expect to get started today & begin making money tomorrow, it could actually take weeks (or months) before you get your first commission.

And the reason for that is because it is a business, not a job, so you have to work at it & build it up.

But the good news is that if you do indeed work at it then affiliate marketing can be a great way to build a solid income online, and the amount you can earn from it (since it’s a business) is totally uncapped.

But like I say the problem is that the My Home Cash Club system makes out like everything is going to be super easy & that you can simply make money right from the get-go with very little work which just hands down isn’t true.

It’s just a gimmick to get you to hand over your cash so that whoever is behind it can cash-in at your expense. Don’t fall for it, instead you can get started at a legitimate place like Commission Academy without having to pay anything upfront.

Can You Get a Refund?

If you’ve already bought into My Home Cash Club then no doubt you’re probably wanting a refund, so I figured I’d touch on that here too… However sadly I have to admit that your chances don’t look too great.

The reason I say that is because quite often many of these scam systems use 3rd party marketplaces to sell their products, such as ClickBank or ClickSure which means you stand a good chance of being able to get your money back by complaining to them directly…

However in the instance of My Home Cash Club it doesn’t look like they’re doing this, it looks like they’re actually taking the payments directly which means it could be much harder to obtain a refund if you’ve already bought in.

Now in general your first line of call to get a refund would be to contact the seller directly… So you should technically contact the creators of My Home Cash Club first – however given all of the lies & tricks on their website, I can’t see them being too helpful with regards to reuniting you with your money.

So my advice instead would be to complain to your bank about the charge, or to look on your bank statement and see if you can see any details of an intermediary that you can contact for help (as they may be using some 3rd party for payments after all).

But more often than not in these instances unless you’ve lost a LOT of money in a single transaction (over £100) then there’s generally not a great deal you can do… And that’s what the scammers prey on.

Is My Home Cash Club a Scam?

I appreciate that My Home Cash Club does give you “some” training in return for your money, however in my opinion I still believe it is a scam because the claims it makes are extremely misleading & unlikely to happen.

In fact I highly doubt that anybody who signs up to My Home Cash Club will make any money at all. I believe that instead they’ll just be more likely to find themselves spending it, not making it – so the creator will be getting rich at their expense.

They’ve certainly tried to cover their butts by providing “some” training on affiliate marketing but in my opinion it is not enough, and whilst it is indeed possible to generate $10,000 to $30,000 per month with affiliate marketing it is going to take a lot of work to do so… You are not going to be able to do it in just 30 minutes per day like the My Home Cash Club system claims you will.

Plus there’s simply no need to waste your money on the My Home Cash Club program because you can actually get started at Wealthy Affiliate for free, which is a legitimate affiliate marketing training ground.

And I can tell you with 100% certainty that Commission Academy is WAY better than My Home Cash Club.

So it comes without saying that there is simply no way I’ll be recommending the My Home Cash Club system to you because as far as I’m concerned it’s just junk & it’ll just see you wasting your money.

Instead if you really want to make good money online I suggest you either join Wealthy Affiliate or check out these alternative ways to make money.

But whatever you decide to do I just sincerely hope that my review here has given you a good insight into how My Home Cash Club works & hopefully it has helped you to save your money.

Feel free to leave any further comments or questions below. 🙂