This morning I came across a brand new money-making system named Super Affiliate Secrets X that promised to provide its members with access to some so-called “weird commission loophole” that can allegedly seem them earning as much as $1,000 per day online even if they’re totally brand new… 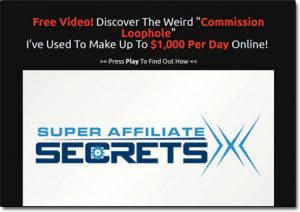 But no doubt you’ll agree when I say that sounds like a pretty bold claim, because after all if it were true then why isn’t everybody doing it? And why is the creator charging us to access to it? Is Super Affiliate Secrets X a scam?

Well at a glance I can tell you that it sure as heck looks like a scam, but the good news is that you’ve landed in exactly the right place to find out for sure as I’ve personally taken a closer look into this system to see how it works & in this honest review I’ll be uncovering everything you need to know.

What Is Super Affiliate Secrets X?

As the name suggests the Super Affiliate Secrets X system is basically a system that promises to give you access to some sort of “secret” (which they call a “weird commission loophole”) that can supposedly see you taking a shortcut & earning money really quickly with a method called affiliate marketing.

And just in case you don’t already know, affiliate marketing is basically where you promote other people’s products online in return for commissions.

Big companies like Amazon run affiliate programs where you can promote their products & you can see a quick example of how it works by looking at the image I’ve put together below:

And the best place I’ve found to get started with it in all my years online is a place called Wealthy Affiliate.

But the problem is there are many rogue programs which have “piggybacked” onto affiliate marketing & try to scam people.

You see whilst affiliate marketing is a great way to make good money, like anything it takes hard work. You cannot just start one day & begin earning hundreds or thousands the next day…

However there are many programs (like the Super Affiliate Secrets X program) that claim you can. They claim they have a shortcut – and surprise surprise in order to get access to that shortcut you have to hand over some money.

But whilst the Super Affiliate Secrets X system brags about how much money you can make & how quickly you can make it (allegedly), there are some things that they fail to mention in their video.

One of those “things” is the fact that out of over 40,000 people who’ve joined, only around 12 make an income with it that you could actually comfortably live of (as shown in their income disclaimer below):

The other thing they fail to mention is the fact that most of those people (even the people that haven’t made any money) actually spent over $10,000 to participate in the program… And to get the most out of it you will need to as well.

So is it worth it? Well you’ve probably made your own mind up based on the chart above but do keep on reading & as I’ll explain below exactly how it all works & whether or not you can actually be one of the ones that makes money with it. 🙂

In short Super Affiliate Secrets X system isn’t even a system at all… It’s basically just a sales page (or a doorway page) that’s been put together for something entirely different named the Super Affiliate Network by Misha Wilson.

But why would they do this?

Well basically the Super Affiliate System is what’s known as a high-ticket affiliate program. It sells people in on the idea of being able to make lots of money really easily but then leaves them to find out that the way they actually make money is by selling the same opportunity onto other people.

It’s exactly the same as how MOBE & Digital Altitude worked, but those 2 companies have both been shut down by the FTC. I personally imagine that the Super Affiliate Network is probably next in the sights of the FTC.

However they do their best at covering up the scheme by claiming to offer “training products”… But it’s quite easy to see that these products do not provide value for money & that they’ve been priced primarily with commissions in mind.

And funnily enough the products all some-way-or-another relate to showing you how to promote the Super Affiliate Network to others.

The real kicker is that the program actually costs in excess of $10,000 – and it’s only after spending all of that money that you’re left to discover the way you make money with it is by getting others to buy into it… 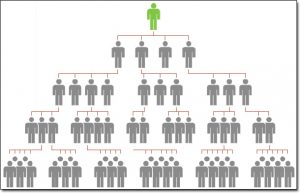 So most of the people that are promoting it are merely promoting it out of sheer desperation to get their money back.

The Cunning Trick Used To Take Your Money

Well let me tell you that the people behind these high ticket programs are very clever.

They put together well-planned upsell processes that gradually push you through level after level & get you to spend more and more without you even really noticing how much you’ve spent overall.

Each “level” of the program is designed to get you more & more excited about the opportunity, and then once again at the end of it you’re hit with another fee to keep on progressing… But not only are you excited, you’re called by a “coach” (who’s actually a salesperson) that forcefully pushes you into making a purchase.

You’ll be told that you’re going to make life-changing money, that it’ll be super easy etc & all the rest of it…

But as I mentioned above once you’re through the entire thing you’ll just be left to find out the hard way that all of those things were false promises… And funnily enough once you’ve stopped spending the “help” will suddenly disappear too.

Where Does Super Affiliate Secrets X Come Into Play?

They’ve also listed the Super Affiliate Secrets X website on various affiliate networks as well to leverage their help in promoting it (by paying them a commission) so that they can sucker more people in.

So Can You Make Money With It?

The answer here is yes & no. Yes, if you’re already an expert at online marketing you could probably find yourself making some money through the Super Affiliate Network – but you’d be doing that by getting people to spend money on a program that likely isn’t going to help them actually earn anything.

I hope your moral compass is better than that 🙂

That’s because in my opinion the training simply isn’t good enough to show you how to get a good start – and that’s why out of around 41,000 people who’ve joined, around 40,000 of them have spent more than they’ve ever made!

Well okay, it’s not technically a scam as such because there is indeed the potential for you to sign up & make money by recruiting others… But it’s VERY costly & it’s much much harder than you’re led to believe…

So whilst it might not technically be a scam, in the same breath in my opinion it’s not really a good opportunity either. Especially not since you can get access to much better programs like Commission Academy for free.

The truth is that the Super Affiliate Network has just been set up to make its owner wealthy. That’s the main focus of it, and a few other expert marketers are making some money from it as well by suckering others in.

Sadly though for the newbies at the bottom of the chain there’s not much hope… They’re just being taken advantage of & lied to all so that the people who’ve recruited them can earn some commissions at their expense.

So with all that being said it’s safe to say that I won’t be recommending the Super Affiliate Secrets X system & instead I’ll be advising that you steer clear of it as it’ll likely result in you spending more than you actually ever make back.

Don’t worry though as there are plenty of other legitimate opportunities for you to get started with.

And as I mentioned above, if you want to stick with affiliate marketing then be sure to check out Wealthy Affiliate as in all of my time online I’ve never come across a better place to get started with it… And it’s free to join!

But whatever you decide to do I just hope that my review here has given you a good insight into the program & more importantly I hope it’s helped you to save some of your hard earned cash. If you do still happen to have any further questions or comments though then don’t hesitate to leave them below & as always I’ll get back to you as soon as I can.