The Team Mansell system has been put together by an online marketer named Michael Mansell & it promises to provide you with an easy way to earn $500 to $1,000 commissions online even if you’re totally brand new. 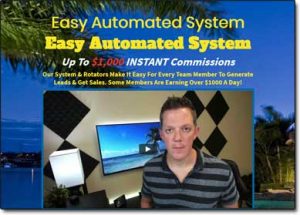 But is it will actually legit or will the Team Mansell system scam you & just leave you with less cash instead?

It’s always a good idea to do your due diligence before jumping into something & thankfully if you’ve been considering joining then you’ve landed in exactly the right place because in this review I’ll be uncovering the truth about how it all really works.

What Is The Team Mansell System?

As I briefly touched on above the Team Mansell system is something that’s been put together by an online marketer called Michael Mansell, and Michael claims that it’s been designed to help “ordinary” people find success online.

Now the first thing I want to point out before I even move on to talk about the system is that Michael is indeed a real person & he is also a very successful online marketer. The reason I want to stress that is that all too often I see get-rich-quick scams launching that use fake aliases or actors in their videos just to trick you into signing up.

So the immediate good news is that Michael is the real deal.

However, whilst marketing is real, the not-so-good news is that he’s got a bit of a reputation for pushing “scammy” types of programs. Some of these programs include the likes of:

Digital Altitude was actually recently shut down by the FTC because they deemed it to be just a pyramid scheme. But yeah, basically the programs he promotes… You can make money from them, but they typically involve signing up & then making money by just getting others to do the same.

So they’re not really outright scams as such – but in my opinion, they’re pretty borderline, and the other downside is that many of those programs make out like making money with them will be super easy but in reality, it never turns out to be the case.

And that’s exactly what Michael claims his Team Mansell system will “fix”. His system is supposedly going to act as the missing piece from those programs enabling everybody to profit with ease.

But how does it all work? And does it really work as promised? Let’s take a look…

How Does The Team Mansell System Work?

Hats off to Michael here, because whilst the programs he is affiliated with aren’t (in my opinion) exactly the most legitimate in the world, I do feel like he is genuinely trying to help people with his system.

You see the problem with the programs like Easy 1 Up, Digital Altitude etc is that they all promise that you can just sign up & start making money really easily. They claim to give you access to some sort of innovative/automated method for making money online…

But when you sign up to them you’re just left to find out that the way you actually make money with them is just by getting others to sign up to them via your link & getting them to invest just like you did.

The issue though that stops people from finding success with this is that most of the programs don’t really give you good enough training on how to actually get a constant stream of new people into the business… And with the people, you ain’t gonna make any money which is why most people fail with them.

Usually, they’ll just tell you to head to Facebook & pester your friends or something along those lines…

Anyway, this is where Michael’s Team Mansell system comes into place…

Michael has put together his own training on how to get visitors to your affiliates & he’s bundled it in with his Team Mansell system, but he’s also created his own unique sales funnels for those programs too.

So the concept of the Team Mansell system looks like this:

Michael claims that by promoting his system you’ll get better conversions, and ultimately the idea is that the people you bring in will also be able to use his training for themselves so they’ll begin duplicating & you’ll earn from their efforts.

Duplication is where the big money is made in network marketing but it’s the most difficult thing to achieve.

He also claims that if you join through his system that he’ll give you access to his team traffic rotator which means you’ll get free sign ups sent to you every now & then even without doing any work.

It all actually sounds pretty good, but when you take a closer look into it there are some major drawbacks…

Admittedly the Team Mansell system looks great on the surface, but sadly it’s another one of those “looks great on paper” things that won’t really quite work out as you’d hope & there are a few reasons for that…

Firstly, the team rotator – which seems to be the biggest attraction isn’t as effective as you might think. It’s a nice gimmick to get you to sign up (after all who wouldn’t want free traffic being sent to them), but the more members that sign up the less traffic you’ll get.

Initially when the whole thing was launched the team traffic rotator will have proved to be a nice little bonus for people because the traffic won’t have been getting split between that many people… But now that it’s scaled up it won’t really be all that good. Heck, you’d be lucky if you got any traffic at all.

And secondly whilst Michael has indeed provided his Team Mansell members with quite a bit of additional training, in my opinion, it’s still not as effective as it could be & as a result, you’ll likely still end up struggling to get started.

So yes, whilst you’ll probably stand more of a chance of making money by going through the Team Mansell system than you would by just joining the programs alone (such as Easy 1 Up etc), I still don’t think that you’d stance much of a chance at making money overall.

Again the likelihood, in my opinion, is that the system will just see you spending money rather than actually making it & that brings me onto…

Is Team Mansell a Scam?

The Team Mansell system isn’t a scam, that would be an unfair verdict for me to arrive at because at the end of the day there is the potential to make money with it & ultimately it just promotes other systems…

But in the same breath the systems it does promote are in my opinion “shady” and once again making money with it is not going to be as easy as it’s made out to be due to the way the training is laid out.

Plus there’s the fact that the whole thing is super expensive right from the off – I mean many of the programs that you’re pushed into purchasing (such as Easy 1 Up) will cost you thousands before you even get started.

Therefore overall even though it’s not technically a scam I still won’t be recommending it to you because I believe there are better places to get started online, such as Commission Academy which is a legitimate, proven and free platform.

Hopefully though after reading this review you can see why I’ve come to the decision I have & hopefully my review here has given you a better insight into how the whole thing actually works.

If you do still happen to have any further questions or comments about the program then don’t hesitate to leave them below & as always I’ll do my best to respond back to you as quickly as possible.