Have you come across the End Financial Stress Now system? Maybe like me, you received an email from a random person claiming that it can provide you with an easy way to make $3,475.65 per day online. 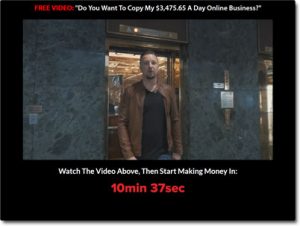 The system claims that you don’t even need to do anything, you can just plug-in & copy a profitable business, but is it actually legit? Or is End Financial Stress Now a scam that’s out to part you with your cash?

That’s exactly what I’m going to be getting to the bottom of here in this End Financial Stress Now review meaning if you’ve been thinking about trying it out then you can rest assured that you’ve landed in the right place to find out everything you need to know about it before you do.

What Is End Financial Stress Now?

As you’ve probably seen, the website for the End Financial Stress Now system doesn’t really give a great deal away about how it actually works, you’re just shown a video in which a guy tells you how the workforce & school system is broke, how you got “screwed” & how he claims he can help you fix it by enabling you to copy his profitable business.

The one thing I was able to pick up on though is that the guy in the video is actually Dave Sharpe, one of the former CEOs of Empower Network who later left to set up his own money-making program named Duplicate Dave.

The video that you’re presented with through the End Financial Stress Now system is the exact same video that is used on the Duplicate Dave system & after progressing through it quickly becomes clear that the End Financial Stress Now system isn’t actually a system at all, it’s merely a sales funnel that’s been designed to get you to buy into the Duplicate Dave program.

You see the Duplicate Dave program teaches people how to make money online, but it also gives people the opportunity to make money by reselling the program onto other people & getting paid commissions in return.

It looks to me like an affiliate of the Duplicate Dave program has created his own 3rd party sales funnel in an attempt to increase the number of people he (or she) can get to sign up the program to make more money.

It seems like whoever is creating these 3rd party sales funnels is then listing them on various affiliate networks & paying people to promote them, so basically, rather than promoting the opportunity they’re partnered with directly they’re creating their own personal sales funnels & enlisting the help of others to make more money.

But you don’t really need to understand how all that works, all you need to know is that the End Financial Stress Now system is not a system in itself like it makes out to be, it’s just a sales page which then basically redirects you to the Duplicate Dave opportunity through the affiliate link of the person that created it (meaning he or she will earn a commission if you sign up).

So, What Is Duplicate Dave?

The Duplicate Dave program is what’s known as a high-ticket network opportunity which in short means that it consists of expensive products & gives you the opportunity to make money by reselling them onto other people.

The products inside of the Duplicate Dave program are all geared towards teaching you how to make money online, so you can sign up with Duplicate Dave & learn step-by-step how to build an online business.

As a member of Duplicate Dave you’ll also be provided with a personal coach who will call you & assist you through the steps, but be aware that the coach earns commissions if they get you to upgrade into the higher levels of the program (so basically they’re a salesperson too).

This can be quite frustrating as you go through the steps as it can seem as if they’re just trying to push you into the higher levels (which they kind of are) but then at the end of it if you decide to promote the program it will be beneficial to you because they will do the same with the people you refer meaning they will ultimately help you make more money.

But as you can see it’s quite a lot like one of those “we’ll teach you how to make money but you actually make money by selling our teaching onto other people” type programs as the training is heavily geared towards reselling the Duplicate Dave system itself rather than building a standalone business.

That’s why I personally didn’t recommend it in my full review here.

The other thing I didn’t really like is that whilst the program does contain some good training, the traffic-getting methods primarily focus on Facebook paid advertising which takes a look of trial & error meaning you could see yourself burning through a lot of cash before you even get the ball rolling.

In my opinion, I prefer programs like Commission Academy which teach you methods you can use to get started without paying any money upfront, then once you get more experience you can introduce paid advertising later.

Well no, it’s not technically a scam but it does make some false promises & it’s rather misleading. Not to mention the fact that the income claim of “$3,475.65 per day” is completely unrealistic.

I mean don’t get me wrong you can indeed make that sort of money online but it’s not just going to happen by “copying a business” like you’re led to believe. It would take time, hard work & dedication.

As I mentioned above the real program you’re buying into here is Duplicate Dave and whilst it’s technically legitimate the training seems to have a very heavy focus on reselling the program onto other people.

The other problem is that whilst there is some good quality training in the program, the main method of getting traffic your taught is through Facebook paid advertising so to see any real success you’ll need to have a big budget to start out with because paid advertising involves a lot of trial & error. In my opinion, it’s almost certainly not the best starting point either.

So whilst technically everything is legit here (other than the hyped-up income claims & speed at which you’ll start earning money) I won’t be recommending it to you because I believe there are better alternatives.

I feel like if you were to get involved with this particular End Financial Stress Now/Duplicate Dave opportunity then you’d just end up pouring money into the program, struggling to see results & ending up frustrated.