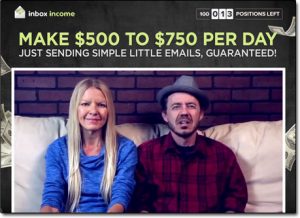 But can you really make so much money by literally just sending emails as these guys claim? I’m pretty sure you’ll be sceptical about the whole thing & I don’t blame you… So what’s the truth?

Is it legit? Or will Inbox Income scam you & end up just taking money from you rather than actually helping you make it?

Thankfully you’ve landed in the right place to find out the answers to those questions as I’ve taken a closer look into it myself to see what it’s all about & in this honest review I’ll be uncovering how it really works, along with whether or not you can really make any money with it.

What Is Inbox Income?

The Inbox Income system is, as the name suggests, a system that can supposedly enable you to earn a ton of cash online simply by sending a few quick emails each day which you’re told you can even just “copy & paste”…

Aside from a few bold claims (such the ability to earn $44 for every $1 spent) the main website for the Inbox Income system, pictured below, actually looks relatively professional & almost trustworthy: 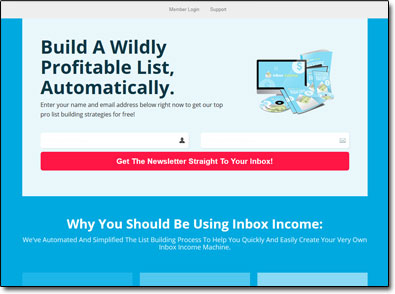 However, after hitting the “Get Started” button to find out more that’s when you’re taken to the website shown below which begins to make the whole thing seem a LOT more like a scam as the claims get bolder & the whole thing just frankly seems too good to be true: 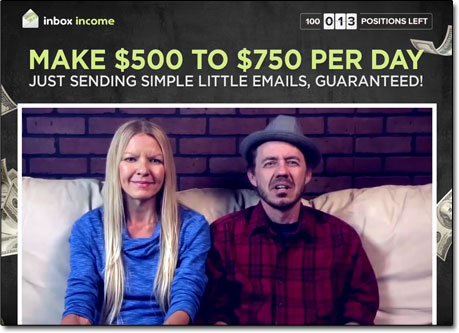 It’s on this page that you’re told you can make between $500 and $750 per day for sending emails, which I think you’ll agree is a ridiculously large sum of money in return such a simple task…

But to reassure you the video starts out showing you testimonials from several “members” of the program who stress that it’s real, that it’s simple, and that absolutely anybody can make money with it…

However, one thing the video doesn’t tell you is how the whole thing is supposed to work… Instead, if you want to find out more you’re pushed into handing over $49 to gain access to the “members area” & this is where it definitely begins to sound like a get-rich-quick scam.

You see I’ve exposed literally hundreds of scams right here on this blog & one of the most common signs of something being a scam is when they ask for your money without giving you all the full details of how it actually works upfront. More often than not these types of things just part you with your cash then leave you to find out the hard way that they don’t really work as promised…

So what’s the deal in this instance? Does Inbox Income really work? Or is this just yet another scam as we already suspect? Let’s find out the TRUTH…

How Does Inbox Income Work?

The reason I can say that so confidently right from the off is that after taking a closer look into it I realized that it’s almost identical to some other scams I recently exposed, like the CB Cash Code & Insiders Cash Club.

What you’ll find out after handing over your cash (which I don’t recommend you do if you haven’t already) is that rather than giving you a way to start immediately earning money by sending emails like it makes out it will, it actually just provides you with access to some low-quality email marketing training.

But there are 2 big problems – firstly the training is so crappy it won’t help you get anywhere at all, and secondly they make out like building an email list & making money is super easy, but it’s 100% not.

It’s only easy if you have proper, legitimate & proven training like that found at Commission Academy.

But even then, even with proper training it still takes work & time… You can’t just expect to start building an email list one day & then making money the next. It could take weeks or even months before you get your first subscribers – and you’d need thousands upon thousands of subscribers to begin earning anything anywhere near the promised amounts of $500 to $750 per day.

Don’t get me wrong building an email list is indeed a good way to make money – but it’s clear to me that the creators of the Inbox Income system aren’t really set out to help you do that, they’re just set out to make themselves rich at your expense.

Like I say the whole thing is nothing more than a gimmick. It’s been designed to hype up the opportunity & get you really excited about the potential of earning lots of money really easily so that you’ll hand over your cash, but then you’ll just be left to find yourself disappointed with what you receive because you’ll find out that it simply doesn’t work anywhere near as they promised.

And there is also NO guarantee either like the creators claim – that’s just another lie they’ve told to get you to sign up.

What About The Testimonials?

At the start of this review, I mentioned how the Inbox Income system’s video starts out with a whole bunch of people stressing how easy it is to make money with the system, and they also boast about their income too…

Well, the truth is none of those people shown in the video are actually making money with the Inbox Income system, and the reason I can say that so confidently is that they’re all actors hired from the Fiverr website.

Here’s an example that proves it…

Firstly, here’s a picture of the guy shown in the Inbox Income video who says how great the system is & how much he’s making: 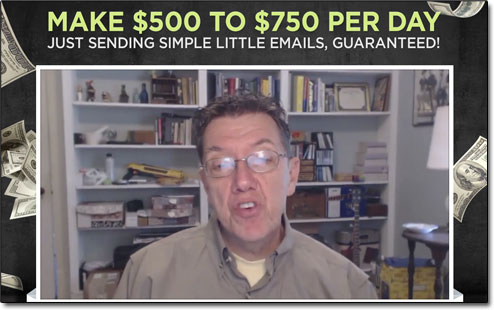 Next here’s a picture of the same guy saying similar things in the videos of 2 other make-money systems (Profit Genesis 2.0 & My Traffic Business System) AND also the listing from his Fiverr profile:

Is Inbox Income a Scam?

The answer to that as you can now probably see for yourself is 100% yes, the Inbox Income system is indeed a scam & whilst you do get access to “some” training, in reality, it’s purely set out to part you with your cash.

I mean whilst you could potentially make some money as a result of the method it’s based around, it’s unlikely that you will because the training is so poor… And in reality, the only people who will really be making money from it are the creators who are making their money by tricking people into buying it.

If you do really want to make good money online it is indeed possible but a program like the Inbox Income program is not the right place to start – and you have to understand that you are not going to just start making lots of money really easily. Sure, the internet is great but making money takes time & work just like it does in the real world… Anything that promises otherwise is likely trying to scam you.

If you do want to get started at a legitimate place though then this program helped me go from $0 to over $10k per month and I highly recommend you check it out (plus it’s even free to get started with).

But whatever you do it’s up to you, I just hope that my honest review here has given you a good insight into how Inbox Income really works & hopefully you can see why you need to avoid it. If you do still have any questions or comments then don’t hesitate to leave them below & I’ll get back to you as soon as I can.