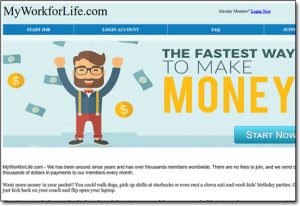 On top of that it also claims to be totally free… But in my opinion it all just sounds WAY too good to be true, so what IS the truth? Is it really legit & can you really make money through this site, or is will My Work For Life scam you instead?

Thankfully you’ve landed in the right place to find out the answer as I have personally taken a closer look into it & in this honest review of My Work For Life I’ll be uncovering the REAL truth that they don’t want you to know, as well as outlining whether or not it really works as promised.

What Is My Work For Life?

My Work For Life is a brand new website that has quickly gained a lot of traction online as it claims to provide the fastest & easiest way for people to earn money online… Even if they’ve never made so much as a single penny online before.

You’re basically led to believe that you can just sign up for free, complete easy tasks & receive money instantly… Plus with just a mere 1-hour per day they claim that you’ll be able to make a full-time income from home…

But there are some things that immediately concern me…

One of them is the fact that they make the whole thing sound WAY too good to be true, and the other is the fact that despite being a brand new website, My Work For Life claims to have been around for several years…

Why would they lie like that to their visitors?

The answer is because sadly I can tell you right from the off that the My Work For Life website is a scam, and the reason I can say that so confidently is because it’s just a re-hashed version of a scam I’ve already exposed many times on this blog before.

Previously this scam has been seen under names such as 1 Dollar Tasks, Two Dollar Click, Four Dollar Click & so on…

The creator (or should I say scammer) behind it just keeps changing the name of it in the attempt to escape the negative reviews (like this one here) so that he can continue tricking people into signing up.

But I appreciate that you likely won’t want to “just take my word for it” when I say that – I appreciate that the promise of easy money can be hard to turn down… And for that reason I will explain exactly how it all works below as well as explain why you WON’T be able to earn anything with it (so that you can see first-hand for yourself that it’s a scam). 🙂

How Does “My Work For Life” Work?

Well in short it basically doesn’t work, and the promise they make about paying you money in return for completing small tasks is an empty one. The only people who’ll be making money from this thing will be the people behind it, and they’ll be doing it at your expense…

But how? If it’s free to join how are they making money from the people that sign up?

Well basically My Work For Life is just what’s known as a fake Get-Paid-To website, which means that essentially they promise to give you a cut of the money they earn from advertisers… But they don’t, and instead they just keep it for themselves.

So when you sign up to My Work For Life you’ll be presented with a whole bunch of “small tasks” to complete, and these are actually offers provided by advertisers… So if you complete any of them, the advertisers pay the people behind My Work For Life some money.

And this is where a legitimate Get-Paid-To website would give you a share of the money, however the people behind My Work For Life are sadly not interested in doing that – they’re just interested in keeping it for themselves.

So if you sign up to My Work For Life & complete any of the tasks then you’ll just find yourself wasting your time, because once you’ve finally reached the super-high withdrawal limit you’ll just be left to find out the hard way that they don’t actually pay.

But aside from that there are other problems & these problems also apply to the legitimate Get-Paid-To websites as well – which is why I don’t really recommend them to people in general (there are better ways to make money).

The other problems are that in general legitimate Get-Paid-To websites only pay out very little amounts of money to their members & this is because the tasks are so easy that so many people are willing to do them. There’s no need for them to pay out large amounts.

And on top of that despite being advertised as free, most of the tasks actually end up costing you money… For example many of the “tasks” involve signing up to free trials, but if you forget to cancel you could be charged monthly recurring fees…

I’ve seen some people sign up to these Get-Paid-To websites expecting a free way to make money & end up being charged hundreds of dollars… So yeah, it’s safe to say that I don’t recommend these sites (not even the legitimate ones).

Instead if you really want to make good money online I suggest you check out a better method like affiliate marketing instead, because using a method like that you’ll be able to build a much larger income & you’ll be much better rewarded for your time.

Don’t Fall For The My Work For Life Scam!

As I mentioned in the previous section of this review the legitimate Get-Paid-To websites only pay out very little amounts of money to their members – and so if I ever come across one claiming to pay high amounts (such as $10 per task like My Work For Life) then I almost immediately know it’s a scam.

However sadly these sites know that if they claim they will pay that kind of money, many people will sign up & try it anyway… Even if they know it potentially might be a scam.

So if this is you, if you have read my review here about My Work For Life & are still thinking about signing up to it anyway “just in case” then I urge you not to because you will just find yourself wasting your time & not getting paid.

If there was truly a way to earn so much money so easily then everybody would be doing it, nobody would be left working a job & the world would be in crisis. That is why it simply cannot happen.

I mean sure the internet is great & it does indeed provide people with many legit ways to earn money but it is not magical & you cannot just expect to earn lots of money without really having to do any hard work. If anything promises otherwise (like My Work For Life) then it is likely just trying to scam you.

Think back to the good old saying, “if it sounds too good to be true, it probably is“…

Is My Work For Life a Scam?

Yes it is, there’s no doubt about it & I can say with absolute confidence that My Work For Life is a scam Get-Paid-To website. Rather than paying the profits out to members the people behind it are just keeping them for themselves & then once people realize it’s a scam that doesn’t pay they will shut it down & re-launch it under a new name.

As I mentioned at the start of this review this exact same scam has already been seen under various different names such as Dollars True, Seven Dollar Click & Four Dollar Click. It is nothing but bad news and should be avoided.

But like I also mentioned there are other legitimate ways to make good money online which you can see on my top picks page here.

And if you want to just go straight to my all-time top recommendation for making money then I urge you to check out Wealthy Affiliate as it’s there that you’ll be able to get the training you need to achieve great success online.

But whatever you decide to do I just sincerely hope that my review here has helped prevent you from wasting your time with My Work For Life & I hope it has given you a good insight into how it really works. If you do still happen to have any further questions or comments though then don’t hesitate to leave them below & I’ll get back to you as soon as I can. 🙂