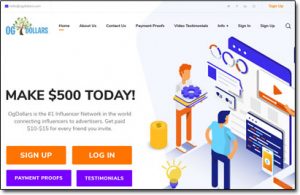 It’s been getting really heavily promoted by social media users lately & the reason why is because it claims to be an “influencer network” that’ll supposedly pay you whopping commissions for inviting others to join.

According to OG Dollars all you need to do is sign up, copy your referral link & invite others through it to get paid. Plus they even claim that you’ll be able to easily earn as much as $500 per day through their site…

But is it actually legit? Or is OG Dollars a scam that you should avoid?

Well I can tell you right from the off that OG Dollars is indeed a scam & it’s actually a pretty dangerous one too. The good news though is that in this OG Dollars review I’ll be uncovering how you can protect yourself if you’ve already signed up.

What Exactly Is OG Dollars?

OG Dollars calls itself an “influencer network” and it basically promises to connect people that have influence on social media & are looking to earn extra money with companies that are looking to promote their products & willing to pay to do so.

Therefore essentially you’re led to believe that by signing up to OG Dollars you’ll be helping to promote reputable brands & earning money as a result… Which sounds pretty nice, especially since OG Dollars claim that you can earn up to a whopping $500 per day.

Plus on top of that they even claim to have taken the hard work out of everything as they claim that instead of promoting brands directly, all you need to do instead is simply refer people to their website.

For every person you refer to OG Dollars, they claim they’ll pay you between $10 to $15… And then the people that you refer get presented with the exact same opportunity to earn too, so it’s a win-win right?

Well, not quite… Because there’s one very important question to ask – which is where is the money coming from?

They claim the following in their FAQ:

But I can tell you that’s a blatant lie… OG Dollars aren’t really paying anybody & instead they’re just tricking people into signing up to an extremely dangerous scam that has the potential to rob you of your cash.

How do I know that? Simple – I’ve already exposed this same scam several times before, it just keeps changing its name in an attempt to escape the reviews which expose the truth about it.

But I know what you’re probably thinking – if it’s free then how can it possibly scam you? It can’t, can it? Well let me tell you that it most certainly can & given the chance it most definitely will.

How Does OG Dollars Work?

In short, basically OG Dollars is an entirely fake website that’s been set up with the sole intention of tricking people into handing over their data, and then referring others so that they’ll do the same.

It’s what’s known as a data-harvesting scam, and it doesn’t really pay.

They’re basically working on the idea that most people sign up to every single website that they visit online using the exact same username, email & password – and it’s true… Most people do.

So they’re using the promise of money to trick you into signing up in the hope that you’ll also sign up to their OG Dollars website using the same details that you use at other sites (such as Facebook, PayPal & Instagram etc).

Then they’ll basically attempt to break into your accounts.

But one of the worst things about this OG Dollars scam is that they’re actually tricking people into doing the dirty work of promoting the scam to others on their behalf by promising to pay them money for “inviting friends”.

This means that people will be unknowingly luring their close friends & family into a dangerous scam.

So there’s a couple of important things I should point out:

And just to make it absolutely clear…

No, OG Dollars definitely doesn’t pay its members and it only takes a quick glance over the comments on my reviews of the previous versions of this scam (such as the Tap 2 Earn comments) to see that that’s the case.

The problem though is that OG Dollars site & the other associated scams have gone to great lengths to trick people into believing that they’re actually earning money when in fact they’re not.

For example, they’ve set their member dashboard up in a way so that it actually makes it seems like your account balance is increasing accordingly with the new referrals that you generate.

So if you share your link & somebody signs up via it, your account balance would increase accordingly by $10 to $15, thus leading you to believe that you’re actually earning cash as promised.

The problem though is the fact that the money isn’t real. The numbers are just faked & that’s why the withdrawal limit is set so ridiculously high – because they know as soon as you try to withdraw you’ll discover it’s a scam.

They, therefore, have set the high limit so that you’ll be forced to refer as many people as possible before you’re able to discover the hard way that it doesn’t really work as promised & that you don’t actually get paid.

Hopefully though you came to this review first so that you didn’t actually end up wasting your time.

And Here’s The Proof It Doesn’t Work…

Just in case you’re still thinking about trying it out even despite what I’ve said above I figured I’d show you some rock-solid proof which will hands-down show you that the OG Dollars site isn’t actually real.

I mean first of all don’t forget there’s the fact that I’ve already exposed it under various different names such as Tap2Cash, Influencer Cash, OG Bucks, Use2Earn, Clout Bonus & so on…

Plus there’s also the fact that despite OG Dollars claiming on its website that it was started in 2015, a quick search on the domain name reveals that the website has actually only been active for a mere 6 months as shown below: 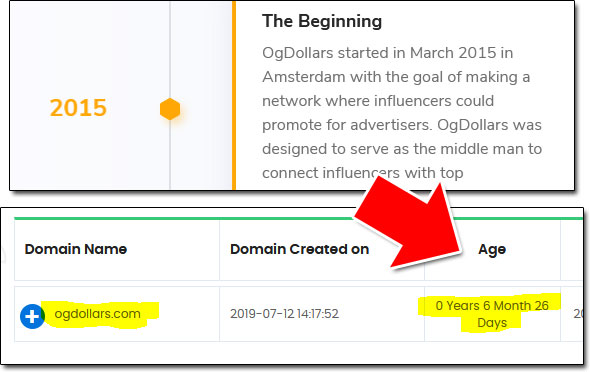 Yet they are claiming to have paid out over 1 hundred million, so clearly they’ve just come up with some completely made-up statistics.

And that’s not the only thing that’s made-up either, because a quick reverse search on the payment proof images using Google’s Reverse Image Search tool reveals that they’ve been stolen from random social media profiles.

Take this one for example:

They’ve just taken the image from somebody’s Twitter profile & added “thanks OG Dollars” to it, as if somebody has used their OG Dollars earnings to buy it when they quite clearly haven’t (since OG Dollars doesn’t really pay!).

My Verdict – Is OG Dollars a Scam?

Yes there’s absolutely no doubt about it, OG Dollars is definitely a scam & it’s a very dangerous one at that because it’s set out to steal your data in an attempt to compromise your online accounts.

As I’ve said throughout this review, basically OG Dollars doesn’t actually pay – it’s just using the promise of money to trick you into handing over your data so that the people behind it can attempt to get the usernames/passwords for your other accounts (such as PayPal accounts etc).

What’s worse though is that the OG Dollars scam then also attempts to trick you into unknowingly luring your friends or family into the scam as well by promising to pay you commissions for referrals.

Basically it should be avoided at all costs because it’s nothing but bad news.

However there is a positive side because whilst OG Dollars itself may not be legit, there are still other legitimate ways you can earn good money online.

And I’ll point out here that one of my all-time favourite ways for earning online which is perfect for newbies to get started with is something called affiliate marketing which basically involves you promoting products or services in return for commissions.

The products you promote could be anything, such as products from Amazon, and the best part is that the amount you can earn with it is totally uncapped. The harder you work, the more you can earn.

So if you like the sound of that instead then I’d strongly recommend you check out Commission Academy as that’s a place which will teach you more about it & give you everything you need to get started.

But whatever you decide to do I just sincerely hope that my review of OG Dollars here has given you a good insight into how it really works & most importantly I hope it’s helped you to dodge it.

If you still happen to have any further questions or comments though then don’t hesitate to leave them below & I’ll do my best to respond as quickly as I can. 🙂