The Second Income Center is a new website that’s just launched which promises to provide its visitors with a “cheat sheet” for making as much as $500 to $1,500 per day online, even if they’ve never previously made a single penny online before. 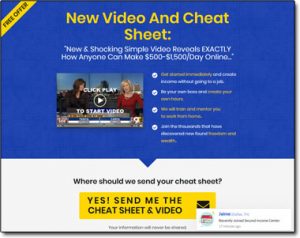 But does it really work? Or is the Second Income Center just another scam site looking to part you with your hard-earned cash?

The good news is that you’ve landed in exactly the right place to find out as I’ve personally taken a closer look into it to see exactly how it works & in this review I’ll be uncovering the full truth as well as outlining whether or not you can really make any money with it like you’re led to believe.

What Is Second Income Center?

And if all that didn’t sound good enough on its own the website even claims that you can get started immediately, that you can choose your own hours & that you can generate an income without having to go to a job…

Well, the catch is that the whole thing does NOT work as promised. Despite the bold promises & so-called “success stories” shown around the Second Income Center’s website I can actually tell you right from the off that the whole thing is just another get-rich-quick scam.

Unfortunately, that means that instead of helping you to make money like it promises it will, the only thing the Second Income Center will really help you do is lose money instead – and that’s because in reality it’s just been set up to make its creator wealthy at your expense.

The reason I can be so confident in saying that so early on in this review is because the Second Income Center is actually just a “doorway page” that redirects you through to another scam named Personal Computer Success, and this is a scam I just recently exposed right here on this blog.

Obviously, though I don’t just expect you to take my word for that… After all I appreciate that you might have been really hoping that the Second Income Center was actually going to work for you & you might no want to believe it when I say it’s a scam… So for that reason, I’ll show you exactly how it works below so you can see for yourself what’s really going on. 🙂

How Does Second Income Center Work?

Okay so, in short, to reiterate in case you happened to jump straight down to this section of the review, the Second Income Center program does NOT work as promised – not one single bit.

Basically the Second Income Center has just been created by an affiliate of something called Personal Computer Success, which is a scam that suckers people into a fake work from home opportunity known as a link posting job.

Essentially it basically charges people around $97 for access to a non-existent job & then once they hand over their cash the people behind it then call them up to try & get them to pay thousands of dollars for “online coaching”.

The problem though is that the people doing the coaching are not coaches… They’re just salespeople looking to get as much money as possible from their victims & once they bleed them dry they just leave them to figure out things on their own… Sadly most people never do & as a result, they fail to find success despite spending a whole ton of cash.

It’s pretty similar to the Lazy Wealth System which is another online coaching scam.

Both programs lure people in with a “teaser” offer that doesn’t appear to cost a great deal & then behind the scenes they begin their work on extracting more cash from their victims over the phone with high-pressure sales tactics.

The Second Income Center itself is not really a system at all – and as I mentioned a little earlier in this review it is merely a “doorway page” that’s been set up by an affiliate of the Personal Computer Success scam.

So basically whoever is behind the Personal Computer Success program is paying the creator of the Second Income Center commissions for sending people their way… This means that in reality, the Second Income Center website is all just a ploy that’s been designed to make you think you’ll be able to make money so that you’ll be more likely to sign up at Personal Computer Success. 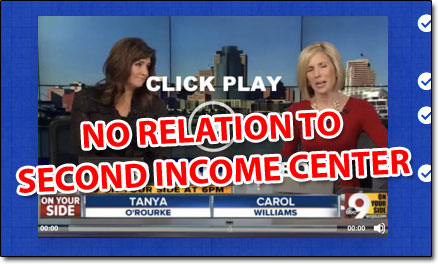 I see those exact same news clips appearing on work from home scams all the time – for example they appeared on the Daily Cash App system, the EB Formula & the Get Paid Daily System.

The clips talk about work from home opportunities in general – not any of those specific systems – and as the news clips state there are indeed legitimate ways to earn money working from home – but none of those scam systems will help you to do it.

They just “steal” the news clips & merge them together in an effort to try & make you believe that it might potentially be legit when in actual fact it’s 100% not.

What About The Cheat Sheet?

The big thing the Second Income Center promises you is that you’ll be getting access to a “cheat sheet” which will allegedly show you some easy steps for making as much as $1,500 per day online… So why haven’t I mentioned this?

Well, the reason I haven’t mentioned it until now is that there isn’t actually any real cheat sheet at all… Instead after entering your details into the Second Income Center website (which I don’t recommend doing) all that happens is the 2 following things:

The promise of a “cheat sheet” is essentially just a gimmick to get you to enter your name & email.

I mean as a bare minimum the people behind the program could have given you some simple, legitimate information on how to get started online – but nope, they don’t  – so it’s 100% clear they really don’t care about your success.

Is Second Income Center a Scam?

There’s absolutely no doubt about it, in fact, I would call the Second Income Center “the scam of all scams” because essentially the whole thing has been built to trick you into signing up to not just 1 scam, but as many scams as possible.

After submitting some bogus details to test the site out I couldn’t believe at just how many scams I was presented with. The main one was Personal Computer Success which opened in a new window, but other scams like Take Surveys For Cash & AppCoiner all started appearing too.

It’s, therefore, safe to say that the Second Income Center is bad news & there is absolutely no way that I’ll be recommending it to you because if you sign up to it you’re just going to end up losing money.

The harsh truth is that you are not just going to start earning crazy money like $500 to $1,500 per day without doing anything – but the good news is that if you are prepared to put in some work then you can indeed make good money online with the help of legitimate programs like Commission Academy.

Or alternatively, there are also a whole bunch of other legit ways you can make money too.

But either way whatever path you decide to choose I just hope that my honest review here helped you dodge signing up to the Second Income Center & hopefully as a result you managed to save some cash.

If you do have any further questions or comments you’d like to add then don’t hesitate to leave them below & I’ll get back to you as soon as I can.