The Cash Formula system has been put together by a man named Michael Green & it promises to provide you with access to a shortcut that’ll allegedly see you earning as much as $5,000 per day online starting from the very same day that you get started… 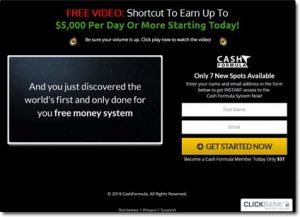 Weirdly though in order to begin making money with the system you’re required to hand over $37 of your own hard earned cash first… So what’s the truth about it? Does it really work as promised or will Michael Green’s Cash Formula scam you instead?

Thankfully you’ve landed in the right place to find out as I’ve personally taken a closer look into the system myself to see exactly how it all works & in this honest review I’ll be uncovering the REAL truth as well as outlining whether or not you can really make any money with it like you’re promised. So keep reading to find out everything you need to know!

What Is Cash Formula?

The Cash Formula system is one of the latest make-money programs to surface on the ClickBank network & it claims to be “the world’s first and only done for you free money system” which is a pretty darn bold claim to say the least.

However this isn’t the first ClickBank program I’ve come across making such claims – in fact just this past week alone I’ve come across around 5 others which all made similar claims but turned out to be complete scams.

Those included the likes of CB Wealth, Voice Cash Pro & the Fast Cash Club… In fact I don’t actually think I’ve EVER seen a legitimate program being sold through the ClickBank network to be honest.

But despite that the system’s creator named Michael Green tries to do his best in the promotional video to convince us to try it out. He says that if you leave the page you’ll never get a chance to access it again – so you must act now or never…

What I can tell you right from the off though is that that’s just a scarcity tactic to try to get you to sign up fast without looking for reviews first… And the reason he doesn’t want you looking for reviews is because he knows you’ll find out it’s a scam – which is exactly what it is.

The reason I say that is because the whole thing is just a re-hashed version of the Profit Formula scam which I previously exposed on this blog a few weeks ago.

How Does Cash Formula Work?

In short the Cash Formula system is just your typical get-rich-quick scam in that it hypes you up about the potential opportunity to make some money, asks for your cash first & then fails to deliver on its promises on the other side.

But what’s important here is that the whole Cash Formula system revolves around something called affiliate marketing which in itself is actually a legit & very good way to make good money online.

And in case you don’t already know about it, affiliate marketing basically involves you connecting people with the products that they’re looking for online in return for commissions. Here’s an example:

So you could become an affiliate of a company like Amazon & you would gain the ability to earn money by promoting any of the products that are found on their site – all you’d have to do is share your “special” unique link.

However whilst affiliate marketing is a VERY good way to make money in all honesty it takes quite a bit of time & work to find success with it. It’s possible that you might not even make money for a couple of months after getting started… But in the long run it is well worth it because you can build your income up as large as you like – there are no limits.

And by the way, you can get started for free with affiliate marketing at Wealthy Affiliate.

So yeah, the problem with the Cash Formula system is that it totally over-hypes the opportunity. It leads you into believing that you’re going to be getting access to some sort of “done-for-you” method that will make you money really quickly but it’s all lies…

After handing over your cash you’ll just be provided with some very low quality training on affiliate marketing. The only reason they give you that is to try & prevent you from getting a refund – and if they could get away with giving you nothing at all then they probably would.

By giving you “some” training on affiliate marketing they can claim that you’ve already received the product so you’re not eligible for a refund because now that you’ve seen the training they can’t get it back.

That’s a common trick used by these types of scams…

So in short you shouldn’t really bother with the Cash Formula system because the training that you do get access to there isn’t really going to help you get started at all – it’s extremely basic stuff.

The Red-Flags That Prove It’s Fake

After working online for several years I’ve learned the hard way that there are no shortcuts. Surely the internet is great & it provides many legit ways to make money but none of them are going to make you rich in a short space of time…

Anything that promises you it will is likely just trying to scam you – but I appreciate that if you’re new to making money online then things like the Cash Formula system can seem quite convincing… Especially since Michael Green (the guy who’s supposedly behind the whole thing) gives a big story about how he bought a “secret loophole” from a group of Ukrainian programmers.

But guess what? Michael Green AKA “the green machine” isn’t even real…

Google has a great new tool which you can use to search by an image & so I decided to look up the photo of Michael Green. It turns out the photo has just been pulled from a free stock photo website as shown below: 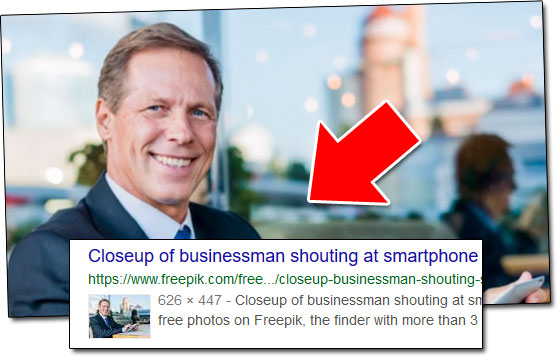 But Michael isn’t the only fake – all of the people who are claiming to have earned profits via the system in their “testimonials” are fake too. They’re all actors that have been hired from the website Fiverr as shown below:

But that’s not the biggest red-flag of all. The BIGGEST red-flag is the fact that the Cash Formula itself is listed on the ClickBank network which is what I mentioned at the very start of this review.

Now in case you don’t know, ClickBank is a marketplace for digital products with a focus on affiliate promotions – so this means product owners can list their products there & have affiliates promote them for commissions.

Now ask yourself this – firstly why would the creator of such a system need to pay people to promote it (if it worked)? And secondly, why would people waste their time promoting it when they could just sign up & make money on auto-pilot (if it worked)?

The answer is simple – it doesn’t work! And that brings me right onto…

Yes, in my opinion the Cash Formula is indeed a scam because it’s just so misleading & what you get access to is NOT what you were sold on. Plus the chances of you actually making any money with it at all are slim to none… The only person that’ll really be profiting from it is the creator & he’ll be doing that at your expense.

Like I mentioned further up in this review the whole thing is based around affiliate marketing (which in itself is legit) and you do get access to “some” training via the Cash Formula system but as far as I’m concerned it’s nowhere near good enough to truly help you get started.

And to be honest there’s simply no need to pay for BS training like this when you can actually get legitimate & great training (along with everything else you need) for free over at Wealthy Affiliate.

Plus I’ve also put together my own free guide for starting a profitable website which you can see here.

But yeah the bottom line here is that there’s no way I’m going to be recommending the Cash Formula system to you because I know for a fine fact that if you sign up & spend money on it you’ll just find yourself disappointed.

Hopefully though my review here has helped you to save some cash & hopefully it’s given you a good insight into how it works & why you should avoid it. If you do still have any further questions or comments though then of course don’t hesitate to leave them below & I’ll do my best to get back to you as soon as I can.