Cash Gem the cashing platform promises to provide you with the opportunity to earn money from anywhere & even boasts a $30 welcome bonus just for signing up. 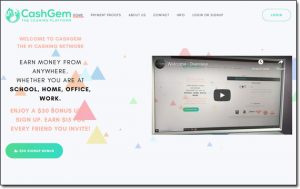 But is Cash Gem legit?

Or is CashGem.co a scam that you should avoid?

After all, it seems a bit too good to be true, right?

Well put it this way, you’ll be glad that you came here to this Cash Gem review before you signed up because I can immediately tell you that CashGem.co is NOT what it seems.

What Is Cash Gem?

Cash Gem calls itself the #1 cashing network in the world & it promises to provide an opportunity for you to earn money online even if you’ve never previously earned a penny in the past.

You’re told that all you need to do is sign up & share Cash Gem with others & that you’ll be paid for every single person that creates a free account after clicking your link.

And on top of that, Cash Gem even promise that they’ll pay you a $30 welcome bonus just for creating a free account yourself.

But obviously that sounds way too good to be true because that’s a LOT of money & so as a result you’ve probably found yourself being a bit sceptical of Cash Gem, right?

And it’s good that you did & came here to this Cash Gem review because I can tell you right from the off that Cash Gem is actually just a scam.

It’s a pretty dangerous one, too.

The reason I can tell you that so confidently is because I’ve actually seen the Cash Gem scam several times before as it keeps on launching under various different names.

And the reason it keeps changing its name is that it’s what’s known as a churn & burn scam.

This means that the creators launch it, scam a bunch of people, then close it down & open it up under a new name to escape all of the negative reviews & scam complaints.

That way, they can continue tricking more people into joining.

How Does Cash Gem Work?

So the idea (as Cash Gem states) is that you sign up to Cash Gem for free, then get others to do the same & that you’ll get paid $15 when they fully set up their account.

$15 per referral, just for getting people to create free accounts…

20 referrals per day & that would mean you’d be earning $300+ per day, more than double the average American salary.

But if you can earn more than double the average American salary so easily, then why isn’t everybody doing it?

The answer is because, in reality, Cash Gem (at CashGem.co) is a dangerous data-harvesting scam.

The opportunity to earn money is completely fake & it’s just a trick to get you to sign up to their website so that they can get your data to compromise your online accounts.

But their scam doesn’t just stop at tricking you. They’re more cunning than that.

Instead, they’ve set up their Cash Gem scam in a way to make you believe that you’re getting paid by referring others, which means they’re actually using you to lure others into the scam.

So if you join Cash Gem, not only will you find yourself being scammed, but you’ll also find yourself potentially unknowingly luring friends & family into the scam as well.

There are a number of red flags with the Cash Gem scam, but the first one I’ll point out is the obvious one, the fact that it simply sounds WAY too good to be true.

As the old saying goes, if something sounds too good to be true, it probably is.

In the instance of Cash Gem, it definitely is.

But on top of that, there’s the fact that Cash Gem claims to be the “#1 cashing network” despite third-party tools reporting that the website has only existed for a mere 18 days.

Then there’s also the fact that the Cash Gem promotional video on the website’s homepage states that Cash Gem has been featured in Forbes & Yahoo news which simply isn’t true.

It only takes a quick Google search to find that out:

In short, the answer is no, Cash Gem doesn’t really pay its members.

The promise of money in return for referrals is just a trick to get you to lure others into their scam so that they can steal their data.

In reality, the only people that will be profiting from Cash Gem will be the scammers behind it. None of the members that join Cash Gem will ever get paid.

And you can easily see that’s the case by taking a look at the comments that have been left on my reviews of the previous versions of the Cash Gem scam below:

Don’t waste your time with CashGem.co.

Is Cash Gem a Scam?

Absolutely. Cash Gem is a total scam & I can tell you that with 100% confidence. None of the members that join Cash Gem will ever find themselves actually getting paid.

By signing up to Cash Gem you’ll be putting your other online accounts at risk of becoming compromised because the Cash Gem creators are simply hoping that you join their website using the same details that you use elsewhere.

Then, if you do, they’ll try to get into your other accounts.

So whatever you do, don’t put your details at risk, don’t sign up to Cash Gem – and if you have already signed up using the same details you elsewhere, be sure to change them ASAP.

Instead, if you really want to earn money online legitimately then I would simply advise that you stick with a legitimate & proven method instead such as affiliate marketing.

If you’d like to learn more about that or get started with it then I’d highly recommend you check out Commission Academy.

Either way, whatever you decide to do, I simply hope that my Cash Gem review here has helped you dodge the Cash Gem scam & given you a good insight into how it really works.