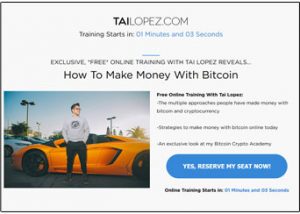 However, due to its high price, it seems that a lot of people are sceptical about signing up, especially since once upon a time it seemed Tai Lopez was actually against Bitcoin… So you might be wondering what’s the deal, is his program legit or is he just jumping on the hype to try & make himself a quick buck?

Well, you can certainly rest assured that you’ve landed in the right place to find out because in this Bitcoin Crypto Academy review I’m going to be uncovering everything there is you need to know about this program, and I’ll be outlining whether or not it can really help you make any money.

Who Is Tai Lopez? 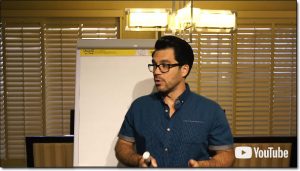 It’s possible that you’ve come across the Bitcoin Crypto Academy or landed on this review without actually having any idea as to who Tai Lopez actually is, so before I dive into details about the program itself I figured I should probably give you a bit of background of the guy that has actually put it together.

So, Tai Lopez is many things… He’s an investor, author & entrepreneur – but he’s mostly widely known for online marketing. He basically “puts himself out there” online & makes money by selling his own courses or promoting other peoples.

It’s safe to say he’s been pretty successful, he’s made millions, owns a large mansion in Beverly Hills & regularly hangs out with various celebrities (such as Rihanna) & even billionaire investors like Mark Cuban.

He’s got several videos of him hanging out with these people on his YouTube channel & when it comes to online marketing it seems that YouTube was the place that Tai Lopez started out (despite now promoting himself on LOT’s of different platforms).

He is very, very well known for his “here in my garage” videos. Basically many years ago he started creating self-help based YouTube videos but they would always start out with him stood in front of his supercars in his garage and he would usually introduce the video by saying “here in my garage”…

He was very clever & knew that the supercars would grab people’s attention (and they did) but as a result a lot of Tai Lopez scam rumours started to circulate the web. Many people thought that he was just some sort of scammer after people’s money, but I can tell you that is NOT the case. It’s likely that a lot of these people were just “haters”, hating on Tai Lopez because of all the money he had made & they probably felt that he was boasting through his videos.

Basically Tai made these videos, grabbed peoples attention & then promoted various courses which he made money from. That was his online business model & it’s still pretty much exactly the same today, only now he is using a lot more platforms to promote his stuff on.

The course that is most well known for promoting is The 67 Steps program, but another popular one is his Entrepreneur Starter Kit. The majority of his courses focus on self development & building businesses. In my opinion they are good, but for me personally they are not quite as actionable as I would like a course to be in terms of the making-money side of things. That’s just my opinion though.

Anyway the bottom line on this part of the review is that despite the many rumours you’ll probably see online about him, Tai Lopez is a legit guy & it’s unlikely that he would ever ruin his positive reputation by willingly putting out a crappy product or scamming people. If you really want to find out more about Tai Lopez himself then you can do so by reading my full Tai Lopez review.

So aside from launching self development & online marketing products, Tai Lopez has now decided to launch a Bitcoin & cryptocurrency investment course which is designed to show you can begin putting yourself into profit.

It’s hardly surprising that he’s decided to do this because Bitcoin (and other cryptocurrency investing) is BIG right now. Many new cryptocurrencies are launching every single day (like Electroneum & DragonChain) and lot’s of new people are looking to invest so many new training programs are also launching too.

One of the biggest Bitcoin training programs to date has been the Bitcoins Wealth Club, so will Tai Lopez’s Bitcoin Crypto Academy rival it? To be honest it I doubt it because BWC also provides an income opportunity, but Tai’z program still might provide you with some valuable information in return for your cash.

The reason I think Tai’s program might give you some bang for your buck is because the training isn’t just provided by him, he’s actually gathered a whole load of cryptocurrency experts together & had them compile the training… So essentially you’re learning from some of the best in the biz.

The good thing is that Tai’s program isn’t just a scam like USI Tech or 10xBitcoin, it’s a legitimate program that provides legitimate training. Those other Bitcoin things are just flat out Ponzi schemes that are not worth your time or money… Tai’s program is purely educational.

So what will you actually learn in his course?

The course is actually pretty good & the content is supposed to keep you going for 2 months but it appears from various videos I’ve seen that you can actually get through it much quicker so it may not be totally jam-packed. One guy claimed that he got through the full course in just one day (but that is unverifiable).

Anyway, what I like about the program is that it’s designed for complete newbies – so even if you are brand new to Bitcoin or cryptocurrency then by the end of the course you should have a good knowledge of what it’s all about & how to go about making money from it.

The other point is that it focuses on alt coins (which stands for alternative coins) rather than just talking about Bitcoin. Basically alt coins are just alternative coins to Bitcoin, but they can help you make lot’s more money with much less investment. The reason for this is because the price of Bitcoin is now very high so you would have to invest a lot of money to see a substantial return over a fairly short period, whereas alt coins cost much less & have the potential to rise much higher in a shorter period of time. So you could buy say 10,000 of them for just a dollar & if they rise to a dollar each you could make a fortune.

Is Bitcoin Crypto Academy a Scam?

No, it’s absolutely not a scam – it’s actually a pretty darn good program. Tai has rounded up the cryptocurrency experts & compiled a good, well organized cryptocurrency training program that is perfect for beginners.

Yes it’s a little pricey, but investing in cryptocurrency without knowing what you are doing could end up being very pricey too LOL. So essentially you are paying for something which could ultimately help you make more profitable investments and as a result it could pay for itself in the long run.

If you are really interested in learning how to make money through Bitcoin or other cryptocurrencies then I’d say Tai Lopez’s program is probably one of the best out there at the moment, also it comes with a 30 day money back guarantee & this is a guarantee you can actually trust.

I know a lot of programs I’ve reviewed like MOBE for example come with naff guarantees, but it seems that Tai Lopez holds true to his word when he offers guarantees so personally I would trust it. You could try the program out & if you decide it’s not for you then you shouldn’t have any problems getting your money back.

So yeah, this program will be getting a thumbs up from me… However just so you know I don’t personally make money from cryptocurrency investments because I believe there is a better way. If you want to see what I personally do to make money then just click here to find out more.