The Profit Shortcut is the name of a website I recently discovered which promises to provide its visitors with a so-called online “shortcut” that can supposedly see them earning as much as $1k per day from the comfort of their own homes, even if they’re totally brand new… 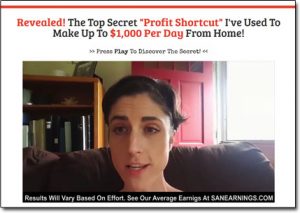 But there’s a catch – which is that in order to get access to the “shortcut” you have to firstly hand over some of your own cash… So what’s the deal? Does it really provide a legit $1k per day method or is The Profit Shortcut another scam out to part you with your hard earned money?

Thankfully you’ve landed in exactly the right place to find out as I myself have personally decided to take a closer look into this system after seeing its bold claims & in this honest review I’ll be uncovering the REAL truth about it & everything else you need to know (including if you’ll really be able to make any money with it).

What Is The Profit Shortcut?

Essentially The Profit Shortcut system is something that claims it can enable you to make lots of money online really quickly & easily, even if you have no prior experience – and it leads you into believing that pretty much everything has been “done-for-you” inside.

In fact the website actually states that you can literally just “activate your success system” which makes out as if you can just hit a button & begin making money… But I can tell you that in reality that’s far from the truth.

The reason I can say that so confidently right from the off is because The Profit Shortcut system isn’t really a system at all, it’s just a “doorway page” that leads you through into something called The Super Affiliate Network which was created by somebody named Misha Wilson. 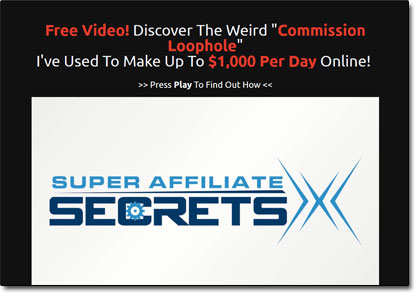 So why are all these sites popping up leading people through into The Super Affiliate Network program? And is there really any money to be made with it?

Well, the short answer to that question is no you probably won’t find yourself making money with this whole thing (and you should definitely pick Wealthy Affiliate instead) – but keep on reading & I’ll tell you exactly what’s going on below & why so many sites are leading people through into this whole Super Affiliate Network thing…

How Does The Profit Shortcut Work?

So in short like I mentioned above The Profit Shortcut system is basically just a doorway website which funnels you through into something called The Super Affiliate Network (which also promises it can help you make money).

And the reason for this is because The Super Affiliate Network is one of those programs which claims to help you learn how to make money, but then ultimately leaves you to find out that the way you actually make money with it is by promoting it onto other people…

But there’s a big catch, which is that in order to actually make money you must spend a LOT of money first – because the whole thing is what’s known as a “pay to play” style high ticket affiliate program.

This means you can only earn money on the levels you’ve personally purchased – so if you want to be able to earn any of those big commissions boasted in the video, then you’ll need to spend those amounts of money (and more first).

As a result the whole thing could end up costing you tens of thousands before you actually even get started, and there’s still no guarantee you’ll make money with it… In fact as per their earnings disclaimer (shown below) – most people don’t:

The Super Affiliate Network earnings disclaimer above highlights that out of around 41,000 people – a whopping 40,000 of them are earning less than $31 per month on average… And only 12 are making an income that would allow people to live off.

So let that sink in… 41,000+ people, and only 12 making an income that the average American could just about live off.

The Super Affiliate Network isn’t the first program to run this type of “pay to play” model, but it’s one of the last ones standing – and as a result I personally believe it’ll likely be well within the sights of the FTC…

They recently shut down 2 other similar companies named Digital Altitude & MOBE, and given the rising attention The Super Affiliate Network is getting through all of these “doorway websites”, I imagine it’ll likely be next.

But would you really want to spend $10k+ on a program that could be shut down tomorrow?

I definitely hope not!

And to be honest there’s really no need – there are many legitimate affiliate marketing training programs that you can get started with for free such as Commission Academy – and unlike The Super Affiliate Network, Wealthy Affiliate actually teaches you how to build a REAL income online by promoting products of your choosing.

But What Are The Doorway Websites About?

Well basically there are 2 reasons why these doorway websites exist. Sometimes they are created by the owners of these high-ticket affiliate programs to capture a wider audience by changing the sales pitch (and making it seem really easy)…

And sometimes they’re created by the top people inside of the program to help them make more money.

Rather than sending people straight to The Super Affiliate Network, the top affiliates often send them through to their owns sales pages which hype the opportunity up & make it seem way easier than it actually is to make them more likely to sign up… After all the more people that sign up via their links, the more money they’ll stand to make in commissions.

So Can You Make Any Money?

The absolute honest truth is that yes, you could sign up to The Super Affiliate Network (via The Profit Shortcut) and make money – but in the same breath, as a newcomer it will be VERY unlikely that you’ll actually see yourself earning any profits.

The reason for that is because in my opinion it lacks high quality training, and it is more geared towards experts (enabling them to take advantage of newbies) instead.

Plus there’s also the fact that most people don’t make money with it (as proven by the earnings disclaimer) – so if you’re making money with it, you’ll be doing it by getting people to spend money on something that likely isn’t going to earn them anything back like it promises it will…

This means you’re essentially “tricking people” into parting with their cash to earn commissions at their expense, so I hope your moral compass steers you away from this thing anyway.

Like I said earlier in this review, there are plenty of other legit ways to make money – there’s simply no need to get involved with something as risky as The Profit Shortcut system, which brings me onto…

Is The Profit Shortcut a Scam?

I know my verdict is going to be controversial here, but honestly because of how misleading the whole thing is I am going to say that in my opinion yes, I do believe The Profit Shortcut to be a scam.

I mean sure, it’s not a scam in the sense that it’s going to break into your bank account & steal your money… But ultimately it is built up on lies & if you do spend money on it you are not going to start earning as easily as they promised… And you probably won’t actually find yourself earning at all.

Instead you’ll just likely find yourself disappointed at what you receive, and you’ll be sucked into spending 10’s of thousands of dollars before you realize that the way you actually make money with it is by promoting the exact same thing onto other people…

So with all that being said it’s safe to say that I won’t be recommending The Profit Shortcut to you & instead I’ll be advising you to steer clear of it because as far as I’m concerned it spells nothing but bad news.

The only person really making money from it is the creator & the handful of “super affiliates” at the top of the pyramid shaped like structure. The average person (as proven by the income disclaimer) makes next to nothing.

Like I mentioned throughout this review though, there’s really no need to get involved with something like this if you’re looking to make money because there are plenty of legitimate places like Commission Academy where you can get started for free – so stick with those instead.

You can also check out a whole bunch of other options on my top picks page here too.

But whatever you decide to do I just hope that my honest review here has given you a good insight into how the whole thing really works & hopefully you can see why I’ve come to the conclusion that it should be avoided. If you do still happen to have any further questions or comments though then don’t hesitate to leave them below & I’ll get back to you as soon as I can.